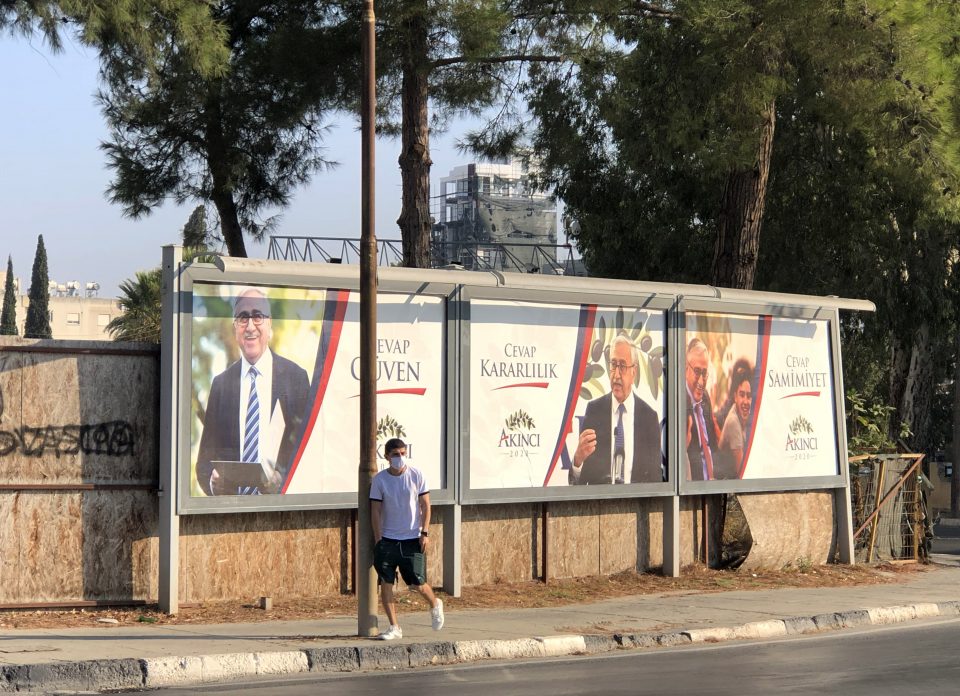 Turkey looms over elections in the north

Is the federal solution dead? Has ‘the government’ handled the Covid-19 outbreak correctly? Is Turkey’s meddling in the north’s internal affairs acceptable? Should one risk going out to vote during the pandemic?

These are only some of the questions facing Turkish Cypriots at the approach of the upcoming ‘presidential’ election scheduled for October 11.

The questions are many but, the experts agree that next Sunday is unlikely to provide the final answer and that the anxious voters will have to run the gauntlet one more time with a second round run-off a week later.

“We are definitely going to have the second round and the biggest question then is who Mustafa Akinci’s rival in the second round will be,” says Ahmet Sozen, international relations professor at Famagusta East Mediterranean University (EMU).

“Common sense tells us that it should be Prime Minister Ersin Tatar but I take that with a grain of salt… We have had similar situations in the past. So it is also possible that opposing Akinci, instead of Tatar, we will see the CTP (Republican Turkish Party) leader Tufan Erhurman.”

According to Sozen, such a scenario is possible because many within the UBP (National Unity Party) party would like to see Tatar go and so might decide that not voting for him is a better way of getting rid of him than electing him Turkish Cypriot leader.

“If he becomes president he will still have a strong influence on the party. If he loses, his political career is over,” the academic explains, before moving on to the likely consequences.

“And if he loses there will be one more outcome of this presidential election and it will be the subsequent collapse of the government and new parliamentary elections soon. And my guess is that if this happens UBP will still be number one but probably CTP will come second so the most likely scenario will be a coalition between these two parties because UBP won’t have enough seats to govern alone.”

Sozen surmises that if Erhurman does in fact beat Tatar and finds himself in the run-off second round, he will prove to be a more formidable candidate for Akinci to take on than Tatar.

“And that’s not only because Ankara prefers him to Akinci but also because he is more acceptable to other parties like UBP.”

He adds that the way the government has been handling the pandemic will also influence the result.

“According to social media, people are not happy about it. This will also cost two candidates associated with the government (ie Tatar and Kudret Ozersay) some votes.”

Prio Cyprus senior researcher Mete Hatay says that the election outcome also hinges to a large degree on how the Turkish Cypriot electorate reacts to the message the government in Ankara has been delivering all over the north for the last several months.

Hatay points to the various meetings that took place in Ankara in early August between Turkish government officials and leaders of the three Turkish Cypriot right-wing parties, UBP, DP and YDP. Reportedly, the main thrust of these discussions was to seek agreement on getting behind a joint candidate.

Other analysts tell the Sunday Mail that there have also been reports of a spate of phone calls and visits to leaders of local communities in the north offering help with solving localised problems in exchange for votes supporting the candidate of the right.

“Ankara wants Ersin Tatar to win and tries to put pressure on Turkish Cypriots not to vote on Akinci,” Hatay asserts.

“However, people are not happy with this situation and this strategy can backfire. Still there are three options – people can gather around Akinci and re-elect him; or they might listen to Turkey but instead of doing what they are told take a middle way and vote for Erhurman; or if Turkey pushes very hard, they might break and support Tatar.”

Experts admit that the pandemic makes their business of predicting much more difficult than in previous elections since there is considerable uncertainty about the eventual voter turnout.

“It is possible that up to 50 per cent of the electorate won’t take part in this election,” Hatay claims. “Many who are on electoral lists are not in the country. Several thousand could end up in quarantine. As for the elderly, they might decide not to risk it and elect to stay home.”

In a recent survey, conducted by Prologue Consulting, more than 50 per cent of those interviewed declined to answer a question as to which candidate they would be supporting.

“Out of this 53 per cent, 15.8 per cent said they won’t vote at all, 14.6  said they hadn’t decided yet and 22.6 refused to answer this question as well as any other question about politics,” according to Mine Yucel, Prologue Consulting director.

“People are angry about so many things. They are angry about how the government handled the pandemic and also very upset with the way Turkey tries to intervene in this election.”

Yucel says that out of the 47 per cent who agreed to answer, 23.6 said they would vote for Akinci, 10.8 per cent for Tatar and 9.2 for Erhuman. “So according to this survey, if indeed the 53 per cent would refrain from participating in the election we could even have the result in the first round,” she speculates.

Sozen is more optimistic about turnout.

“Yes, Covid might lower the ratio of attendance a bit more but I don’t think it will be less than last time, i.e. around 60 per cent plus,” he says.

According to Sertac Sonan, associate professor of international relations at the Cyprus International University (CIU), much will depend on how the electorate perceives the importance of this particular election.

“If people think this is just another election, they won’t vote. But if they decide that the stakes are high, and I think they are, it is a different matter.”

Sozen says that the most important issue at stake in the election is still the Cyprus problem.

Yet he doesn’t believe that the result will determine or influence the possibility of restarting the negotiations.

“It will be mostly dictated by Turkey. Ankara is strengthening its hand and has increased its involvement in the region’s politics significantly so in any case Cyprus will be just a side dish at the mezze…

“Even if Tatar wins and Guterres calls for a five-party meeting two weeks later and the Greek Cypriots say they want a federation, once Turkey decides to sit at the table, Tatar will be there as well.”

Sozen believes the same will apply to relations between the new leader of the Turkish Cypriot community and Turkey.

“In the end, whoever is elected will work with Turkey. Even if this is Akinci, and we know he is Ankara’s least preferred, once the election is finished, both Erdogan and Cavusoglu will contact him and work with him. End of story …”

Voting during the pandemic

According to the Turkish Cypriot Supreme Election Council (YSK), voting procedures during the presidential elections on October 11 will not be very different from the pre-pandemic period.

“The only difference will be that everyone will have to wear masks and before entering polling stations voters will be given plastic gloves that they will have to wear when voting. People will be asked to keep a social distance of 1.5 metres from one other or between various family groups,” a YSK official told the Sunday Mail.  “Since the weather is good all the windows in the polling stations will be open, so there will be no need for AC.”

The official added that all the information about addresses of the polling stations and ballot boxes etc, has been posted online, precluding the need to send it by post, as had been customary in previous years.

The Sunday Mail learnt that Mustafa Akinci’s team is not happy about this believing that it could result in a lower turnout since not everyone necessarily has guaranteed access to the internet and older voters may not be familiar with online technology.